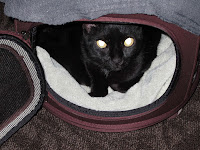 Ok, that didn’t happen – but it ALMOST did!
My sweet kitty, Star, was scheduled to have several teeth extracted yesterday. I had everything planned so we could easily get out the door for our early morning appointment.
What’s the saying…PEOPLE MAKE PLANS AND GOD LAUGHS.
Since Star couldn’t have any food, I put her in the bathroom so I could feed her sister. When Molly was done, I went to let Star out but the door would only open about an inch. My little sweetheart had pulled out the bottom vanity drawer, which butts up to the door.

And there was Star, sitting in the drawer…staring at me. There is not a mean-spirited bone in her body, but for just a second I do believe I saw a smile on her face!
Well, I panicked. I envisioned someone needing to take an axe and hack through the door. I ran into the garage looking for ANYTHING that might help. That’s when I saw the pry bar!

I was just able to get it through the opening, and slowly…VERY slowly…I was able to close the drawer and retrieve my clever kitty.

I was really fortunate, because Star (who channels Houdini) routinely opens drawers to the point that they fall off their rollers.

Had that happened, I wouldn’t have been so lucky. 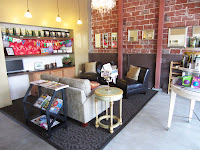 By the time I got to Mt. Tabor Veterinary Care I was pretty frazzled. When I walked in the door Theresa (right) and Sarah (left) seemed to know how to calm me down.
I waited in the beautiful main room while Star had the procedure. Who wouldn’t be at ease in this lovely space? I was given updates several times, which helped with my nervousness.

Finally, I was brought back to the wonderful Dr. Krissy Bussman, who was holding my little girl in her arms. I couldn’t believe she was awake…Star, that is, not Dr. Bussman.
I brought Star home later in the day, and she immediately went into the cat enclosure to stalk the chipmunks who were running on the other side of the screen.
So, all in all, a successful day.
In the future, I’ll be much more careful about where I confine Star. I’ve also informed her that the tool belt she put on her Christmas list AIN’T GONNA HAPPEN!
Chris Davis
Lighthearted Press
Publishing magical books for animal lovers

Chris, don’t even bother trying to outsmart her. You won’t! Glad everything came out okay.

What an adventure but all’s well that ends well. Cats always know when it’s time for the V E T.

Layla, after reading your comment I know where I goofed. I should have just spelled out V E T rather than saying the word!

Made my day once once more, excellent post..two thumbs up!:)