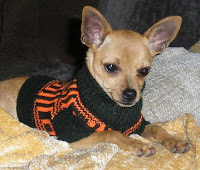 Lily was a 6 lb. Chihuahua who made her home with Barbara Hitchman in a 55 and over gated community in Menifee CA.

Lily got loose from her home on January 26, 2012. Their neighbor, Larry Edward Jaurequi, came out of his home with a golf club and approached the dog, said authorities.

According to The Californian:

“Without reason or cause, the male swung the club against the Chihuahua as if driving a golf ball off its tee,” Riverside County sheriff’s Sgt. Sergio Rodriguez stated in a January news release. “The force of the swing sent the animal flying through the air. The suspect was preparing for a second swing when he was stopped by people that just witnessed the attack.”

Hitchman rushed Lily to a veterinary clinic, where the dog died. The dog’s injuries included a lacerated liver, brain damage and a fractured leg.

Mr. Jaurequi was charged with three felony counts and pleaded not guilty to all counts at his arraignment on March 19th. Another court appearance /hearing is set for April 16, 2012 at the Riverside Hall of Justice, Riverside, CA.

A memorial vigil for Lily will be held on Sunday, April 15, 2012, at 3:00p.m. at the Menifee Dog Park located at the corner of Menifee Rd. & Aldergate Drive, Menifee, CA.

My dear friend, Kathleen Otto…a passionate animal lover…lives in Sacramento and was following this tragic story. She and her husband, Jack Sellers – of Jack Sellers Racing – wanted to bring awareness not only to the horrific death of little Lily, but to the plight of the thousands of animals each year who are injured or killed by their abusers. 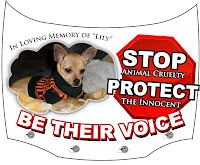 The hood of the #15 car, driven by Jack Sellers, will feature Lily’s photo and include the words “Stop Animal Cruelty, Protect The Innocent, Be Their Voice.”

What can you do to help? Here’s what Jack and Kathleen have to say:

“We, at Jack Sellers Racing, are urging everyone to speak up against animal cruelty. YOU can make a difference. Show up at arraignments and hearings for animal abusers in your community (you may not be allowed in the courtroom, but you can show up at the court). Let the judge and the district attorney know that you support the maximum sentence in these cases.

If you want to show your support and are unable to attend the arraignment and hearings, write a letter to the presiding judge and the district attorney handling the case. Let them know you support a felony conviction with a tough sentence and let them know why. You CAN help be the voice for these innocent victims of animal abuse.”

If you would like to be “Lily’s Voice” please write immediately to: 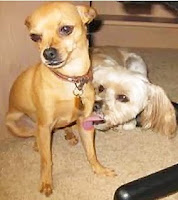 Please reference Lily’s Case Number: RIF 1201384. Let Judge Hernandez know that you are against a plea bargain in this case and that you support a felony conviction and harsh sentence for this heinous crime against Lily.

You can also contact Paul E. Zellerbach, the Riverside County District Attorney, about this case. Correspondence sent to the DA should reference Case Number DA 291728. Emails can be sent in care of his executive assistant, Laura Topping, to lauratopping@rivcoda.org.

Letters can be mailed to:

All letters and emails must be received before the hearing date of 4/16/12.

Thank you for helping to obtain justice for Lily!