He was on the deck, in the middle of the night!!

I had come downstairs at 3:00 this morning, after having been up for hours with a touch of food poisoning.

The cats were ecstatic – EARLY BREAKFAST!! I put out their bowls, then strolled by the deck door to check for Sammy.

As some people know, Sammy was the outside cat I fed on the deck for 8 years. I was never able to get near him, but I provided a house, food and flea meds, which helped make his life easier.

He’d beaten the odds many times. Five months ago my beloved boy vanished, presumably lost to a coyote that had come through the woods that day.

But I NEVER stopped looking for him. 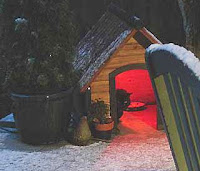 My heart stopped – SAMMY! He was actually sleeping in the house!! I knocked on the door and he lifted up his head, so I knew he was ok! Tears streamed down my face as I ran into the kitchen to get his special food. As soon as I had fed him I’d call my friend, Judy, who knew that if he ever showed up again she’d get a call from me no matter what time it was.

The can opener turned and I took off the lid. Odd…the label was correct, but I could tell the food didn’t look quite right.

Then I noticed that the can opener was sitting on the table, and not on the counter.

Then I saw that the living room furniture was sitting in the kitchen.

And then I knew the heartbreaking truth – this was a dream!

I didn’t know I had gone back to sleep. I shot up in bed, and the realization that this was just a dream – that Sammy was NOT waiting for me on the deck – tore me to pieces. To have that joy ripped away was gut-wrenching. It had felt so real…so unbelievably real.

I sobbed buckets of tears…and then I finally stopped crying for him.

But I will never…ever…stop looking for him.

Chris, what a cruel trick, I’d be out of my mind. But this just shows how deeply you want to see him again. I’m so sorry.

Oh, Chris, how heartbreaking! I was going to say that I had a feeling that Sammy was not gone and that you would see him again. Now I am afraid that this might have been a visitation, that he has shown you that he is all right.

At least you were happy with him for that short time.

Oh Chris! What a difficult dream. I’ve lost a cat with no idea of what happened. It was a very difficult loss because I, like you, kept hoping Zen would come back. Take good care!!

Thank you, Bernadette. The dream was SO REAL I think my sweet boy DID stop by, and that brings me comfort.

Andrea, I think you’re right – Sammy showed me he is ok. He certainly seemed content…and that brings me peace.

Thank you, Tammy – having lost Zen the same way I know you understand what it’s like to always be on the lookout for a missing critter.

When I began reading this post awhile back my heart literally jumped with joy. Oh my! He’s back. “Sammy we love you!” As I read I remembered how ecstatic I felt when I sighted my missing cat. Though not a dream.
Still Waiting,
bob

Bob, I know you understand exactly how heartbreaking this was for me. I still look for Sammy several times a day. Who knows, maybe one day….