Home → News → The Latest → Farewell to my dear Sammy 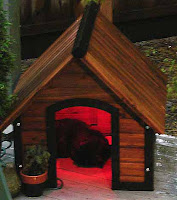 I guess I always knew this day might come. That there would be a morning when I would turn on the light in Sammy’s house to give him his breakfast, but he wouldn’t be there.

And he wouldn’t be coming again.

Sammy is the feral cat I’ve been feeding on my deck for eight years.

I’ve never been able to get near Sammy. I’ve never held him in my arms. I’ve watched him make it through bitterly cold winters, wounds from cat fights, and terrible flea allergies.

Last fall I bought him this log house, which Sammy took to right away. Then I added a heat lamp, and suddenly things were looking up for Sammy.

This past spring Sammy unexpectedly changed his territory. Instead of going through the safer residential area, he changed direction and began heading into the woods. I followed him several times, and saw that he cut through the trees to go to a different residential area. I was still worried, but tried to remain hopeful. What I didn’t know was that neighbors were starting to see the coyotes again.

Sammy continued to come every day for food, but I could tell he was more wary. He showed up for breakfast on September 21st, just as he had been doing for years.

That was the last time I saw Sammy.

I’ve lost many be 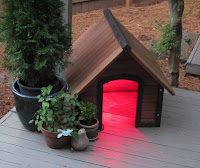 loved critters in my life, but I was always there at the end. To think about the likely cause of Sammy’s disappearance is excruciating for me.

I’ve walked to the door and looked for Sammy hundreds of times in the last week. I’ve thrown my arms around the empty house and cried tears that felt like they would never end.

I guess there is always the chance that Sammy is perfectly fine. Perhaps he sensed the danger and changed territories to one that no longer includes my home. Perhaps one day I’ll look out the door and he’ll be curled up in the house. Oh, how I pray this happens.

This little piece of fur is all I have left of Sammy. I found it last May in his house. It was precious to me then. It is even more precious to me now.

Farewell my dear, sweet boy. The light will always be on in your house…

I’m so, so sorry to hear this Chris. It sounds like there is a possibility that he is fine – ferals have a way of changing course – it may be that he is sneaking in late at night for a quick bite and a snooze. Or perhaps he has determined that the threat outweighs the benefit – a common feral trait. Hang in there – it’s just so amazing how much these animals inspire us – even when we have never had contact with them. That’s a special gift and one more fascinating aspect of cats.

Chris,
I am so sorry to hear about Sammy. I will say prayers for him that he is safe and that he has his Angels with him to protect him. You know that if by chance he has crossed over, he will be your forever guardian. I hope that he comes back to you and if not, you will meet him at the Rainbow Bridge.

Take Care and Big Hugs to you,

Stacy, thank you so much for your encouraging words. I’m not able to leave food out for Sammy, because the birds pounce on it and gobble it up! I’ll never stop hoping that Sammy is out there…somewhere…and will return to me one day.

Thank you, Christine, for your prayers. If Sammy is waiting at the bridge, he has many of my beloved angel critters to keep him company!

Chris, this is why I quit feeding cats outdoors–it’s sometimes more heartbreaking than losing my own! I know that your natural intuitiveness is probably correct, but I hope, with the first cold spell, you find him back in his home, waiting for you to turn on the light.

You’re so right, Bernadette. The bond I had with Sammy was just as deep as the one with my inside kitties. His loss is so very heartbreaking. Please hug all your beautiful black kitties for me, ok?

He probably just moved. It seems like of cold, but it’s not like they can give you a forwarding address. My own Twitch was a stray, then someone took him to the shelter and now he’s all cozy up on the bed with me, but sometimes I feel bad knowing that his old friends don’t know what happened to him. For all we know the same thing is happening to your little friend.

That’s such a good point, Chris. Twitch is safe and happy with you, but whoever may have taken care of him in the past, like I did with Sammy, will never know. I do hope Sammy is curled up on someone’s bed…somewhere.

Dear Chris,
I have been delighted for a good while by the charming relationship between Sammy and you. He has been a magical creature whom you have taken into our hearts. His little house and warm red light on your porch is a beacon of welcome who needs a warm place to stay for the night. I will really miss him. I will remember him.

Bob, you’re so right – Sammy was a magical little critter. He beat the odds for over 8 years. The little heated house will always be there, but it just isn’t the same without him. Thank you for remembering him – that means a lot to me.