When I brought my cat, Dickens, home from the emergency hospital last month I thought I’d have a few more days with him.

I didn’t know that wouldn’t happen.

But his sisters knew.

They each sniffed him when he walked out of the carrier. Then the three girls ran upstairs. It didn’t matter that we’d all been together for the last 12 years, ever since the kitties were just a few weeks old. They wanted nothing to do with their brother.

I’ve heard animals in the wild don’t want to be around the sick or injured…it attracts predators. Watching this unfold in my own home was fascinating. Here I was, broken into a million tiny pieces over Dickens, and his sisters were nowhere to be found.

Dickens accepted this graciously. He sat on a bed I created for him in front of the fireplace, peacefully saying goodbye to the only home he had ever known. 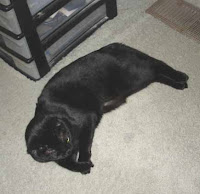 We lost Dickens that same night. I didn’t have to explain anything to the girls…they understood.

It was only a few days later that things began to change. Dickens had been the office kitty, my constant companion when I was in work mode. He had taken over that post four years earlier after I lost my beloved dog, Jake.

And now Star has quietly taken up the position left vacant by her brother, sprawling out on the carpet next to my chair. She has never…ever…done this before.

Pippen sits at the top of the stairs, watching over me like a great cat on the Serengeti surveying the horizon.

And as for Molly…time will tell.

He may have said, “I want Mom to myself for these last few hours. I’ll send instructions later.” I’ve had all sorts of reactions here, but it’s always healing when the others start to move in again to make the circle complete.