Seen in the Sunday paper: 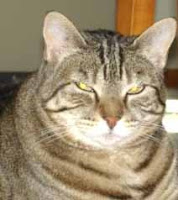 LONDON — Britain’s postal service says it has suspended deliveries to a woman following repeated attacks by her 19-year-old cat.

The Royal Mail said Friday that it had halted deliveries because postal workers had already sustained “nasty injuries” at the address in the town of Farsley, near Leeds in northern England.

The woman was identified as a 43-year-old pharmacy worker. Media reports say she found it hard to believe that her cat, named “Tiger,” could be behind the attacks.

She told two newspapers the animal spent most of its day sleeping and didn’t have the energy to chase postal workers.

Note – this is a picture of MY sweet cat, Pippen…on a good day.