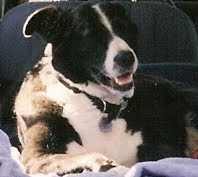 Once upon a time there was a most magnificent dog named Jake.

But if you’ve visited my website, read my books, or have ever spoken with me for more than 5 minutes, you probably already know about Jake, my beloved forever dog…now an angel dog.

However, this story isn’t about Jake. It’s about Rex – the dog down the road who Jake adored.

You need to understand that Jake didn’t socialize with other dogs. He pretty much ignored all the dogs we met at the park or on our treks through the neighborhood…except for Rex. Rex was allowed to roam free, so he often joined us on our walks. And when Rex showed up, Jake happily let Rex take the lead.

Which is EXACTLY what happened when Jake followed Rex on some wild goose chase through the woods many years ago. It was the ONE and ONLY time Jake ever ran off.

You can probably guess what followed – mobilizing the neighbors, quickly putting up “Lost Dog” signs, driving tearfully through the neighborhood asking if anyone had seen my dear Jake. I even stood at the doors of the local church just as Sunday services were ending, begging the parishioners to please keep their eyes open for my lost dog.

The two canine troublemakers made their way back to Rex’s home several hours later. I drove down to pick Jake up…I never knew a dog could possibly hang his head that low. In retrospect, it was sort of funny – but not at the time!

The day after my dear Jake left this life I gave one of his beds, his food and some toys to Rex’s family. I felt Jake would have wanted that.

Rex left this world a few weeks ago. He was almost 17 years old. As much as I’ll miss seeing that old boy shuffling down the road, I am absolutely certain that he and Jake are together again, hanging out and very likely causing some heavenly trouble.