The heart is a fickle thing!

Home → News → The Latest → The heart is a fickle thing!

The heart is a fickle thing!

Even after 7 years I can still remember the young man in the cutlery store.


I had just seen the second Lord of the Rings movie. Little did I know I would see it 11 more times in the theater! There’s no way to count how many times I’ve seen it at home.

My heart had stopped during the scene where Eowyn pulls out her sword. It became important to me to hold a sword in my own two hands. Ah, but where to go? Try looking up swords in the yellow pages! My quest led me to a cutlery store in one of the local malls. On the wall I saw Glamdring, Gandalf’s sword. That would have to do. 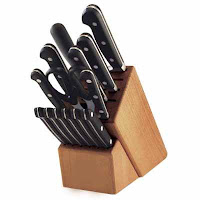 I asked the young man behind the counter if I could please hold the sword. He brought it down and placed it into my trembling hands. I held it high – something they really don’t like you doing in the mall – as tears fell down my face.

“I’ll bet working around all these swords must be wonderful for you” I said, expecting him to wax poetic about his dreams of battle and choice of weaponry.

“Actually,” he told me,” I’m holding out for one of these.” He pointed to a block of kitchen knives. “I’m going to be a pastry chef!”

Today I walked into that same cutlery store in the same mall, and told that story to the man behind the counter. He gave me a broad smile when I got to the part about the pastry knives.

“That was my son you spoke to. He was still in high school at the time.” So I asked the father if his son had followed his heart into the cooking world.

It turns out he did, indeed, follow his heart…and became a nuclear engineer for the Navy. But he stills loves to bake!

So here’s to following your heart…wherever it leads you.
Chris