Home → News → The Latest → For Creamsicle 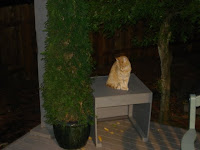 He wasn’t my cat. He had spent the last 6 years with a family who lived around the corner from me, but I didn’t know that when he showed up in my yard earlier this year.

He was awfully thin – his bones poked out of his orange striped body. I began feeding him, which made him a regular visitor to my yard. I didn’t know his name, so I started calling him Orange Cat – or OC for short.

One day I saw him sprawled out in front of my neighbor’s home, and I learned he was THEIR cat, and his name was Creamsicle.

It would have been hard not to love him. He was very affectionate, and could purr and chatter with the best of them. So he became my 6th cat, joining my 4 inside kitties and Sammy, the outside feral cat I’ve fed for over 6 years. 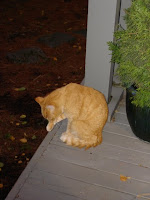 Creamsicle made his last appearance in my yard about two weeks ago. I wanted to believe everything was fine, but a visit to his home the other day confirmed that he was missing, with evidence suggesting he was taken by a coyote.

When I wrote For Every Cat An Angel I chose an orange striped kitty for the story so my kitties (none of whom are orange) wouldn’t have any issues with me. We all know what it’s like when your feline gets an attitude – MAJOR CATTITUDE!

Whenever I pick up For Every Cat An Angel I’ll always think of Creamsicle, who touched my life and found a forever place in my heart.

Farewell, OC – I’m sure going to miss you.

Such a lovely, touching story. Creamsicle has his forever angel with him now – he’s flying free, feeling strong and healthy, and laughing at the twinkling stars who smile broadly at his antics.