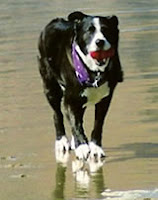 “And there will be times when your world will fall apart, when a beloved animal becomes lost, ill or has simply come to the end of their journey with you.”

Those were the words I wrote in my very first blog entry, back on June 5, 2006. I had no idea that 9 days later I would lose my own beloved forever dog, Jake. I can’t begin to tell you how devastating this loss was to me, but if you’re reading these words, chances are you understand.

Losing Jake – it wasn’t what I had planned on. Oh, I knew we were coming to the end of journey together – Jake’s old and achy joints were having a hard time. But I had hoped that MAYBE we might have the rest of the year together.

There’s a beautiful book by Sue Bender, called Everyday Sacred. The cover shows a simple bowl. The author says that bowl represents the “begging bowls” used by monks, who accept whatever is put into their bowls.

Losing Jake was NOT what I had wanted, but it’s what was put into my bowl, and I had to accept it.

I began writing about my grief in my blog. I wrote about how “deafening” the overwhelming quiet was in my home. I wrote about letting go with a loving heart, even if that heart was broken. I learned that grieving is a journey…a personal, private process.

Yesterday, there was a terrible fire in one of our schools here in Portland. The children all got out safely, but the devastation and horror of the experience was seen on the faces of all those kids as they left the building.

This morning a therapist was interviewed on TV about the fire. She said the best thing a person who has been through a trauma can do is to talk and talk and talk about the experience, until they are almost bored with the telling of the story.

The grief and terror pour out of them until, eventually, they begin to separate from the story. That’s all part of the healing process.

Maybe that’s what I was doing in my blog…telling my story…telling Jake’s story.

Next: Knowing when it’s time to say goodbye.