Home → News → The Latest → In Celebration of Marley 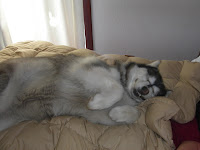 When Ed Miller sent me some pictures of his dog, Marley, I asked if I could share this one photo that he called Laughing Malamute. It gave me such a joyful feeling – just look at that beautiful face!

“She was laughing at a joke I told her about two Dalmatians who get lost on a dark road,” he said.

Ed had to say goodbye to his beloved girl last week, but as he talked about her it was clear how deep the bond between them was. He said Marley used to select toys from her box of stuffed animals, and then return them when she was done playing.

Ed signed his email “Ed Miller, aka Marley Malamute’s Dad.” He certainly was.

I know Marley will always watch over you, Ed, as she flies through the starry skies.

What a wonderful bond to have with Marley. Our deepest condolences to Ed, aka Marley Malamute’s Dad. Everyone should have a great bond with either a cat or a dog in their lives. Ed definitely haad this with Marley. Love, Blazer & Mom (Vicki)

I can totally identify with Ed and Marley is his Forever Dog which is obvious. I can remember my Brandy, my chocolate lab, who went to the bridge surrounded with so much love; then my Sammie cat who sometimes thought he was a dog – he went to the bridge at 20 yrs. of age; and lastly but never least my beloved Timmy, the Tiger who was my forever kitty, my soulmate and a cat with one big cattitude!. God bless you, Ed and Marley.
Love, Kathy and my dogs Ebony and Barney.

I think connecting with a critter opens up parts of ourselves that aren’t so easily available in human relationships. There is a beautiful quote from Loren Eiseley: “One does not meet oneself until one catches the reflection from an eye other than human.”