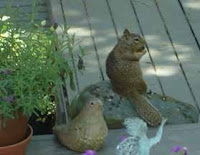 So I’m driving East on I-84 in Portland and get off at the 33rd Avenue exit. At the top of the ramp there’s a little ground squirrel running around, with cars swerving to try and avoid hitting it. I stopped my car, grabbed my jacket and ran over to the squirrel, with the intention of nabbing it.

It was a great plan…but the squirrel had other ideas. It ran under my car and up into the engine. I’d like to tell you I was completely composed, but the truth is I totally lost it. Traffic is backing up onto the freeway, and I’m standing there shaking. A car stopped and a really nice man got out to figure out what was wrong with this crazy person.

After reading my owner’s manual we figured out how to open the hood. And yes, there inside the engine was the squirrel…who immediately ran down into the bowels of the car.

I’m just one step away from being completely hysterical. I start grabbing things from my car. It turns out the eco-friendly grocery bag and the storage thing from the back of the car are useless when trying to dislodge a rodent from an engine. It’s amazing I didn’t pull out my sunglasses and some CDs. 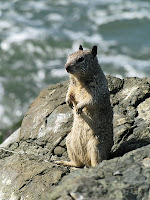 After 20 minutes I had to do something. People in the cars passing by were NOT happy with me. I very gently started the car and drove a few blocks. I kept waiting to hear the sound of an animal screaming, but I heard nothing. I pulled over and got out of the car and waited. I didn’t even know if it was still in there. Nothing happened.

I had to get home so I started driving through the side streets, all the while sobbing, shaking and praying. I was terrified. That’s when the squirrel started to chirp from somewhere inside the car.

To make…as they say…a long story short, I drove home, grabbed my cat carrier, and then drove to Firestone and asked the mechanic if he would look under my car for a squirrel. I wish I had a picture of that man’s face – he must have thought he was on Candid Camera.

As I type this the car is parked outside. I’m giving the squirrel one last chance to vacate, just in case it’s still in there. The mechanic thinks the squirrel probably bailed when it got too hot in the engine.

Are you ready for the punchline of this story? When I stopped to “save the squirrel” I had just come from a presentation on Living Fearlessly. I had gone from feeling like I could take on a dragon to being reduced to a blubbering child within 5 minutes.

I suspect there’s a lesson in there somewhere…

My heart goes out to you. I’m sure he survived and is off somewhere sharing this big adventure with the crazy lady and her car. Think of it as a Geiko commercial with the squirrel who causes a car to crash trying to avoid it and then does high 5’s with its squirrel buddy. You will survive. Kathy

I can certainly feel and understand your terror. I would have just been so upset if I had hurt that little guy. I feed the neighborhood squirrels unsalted peanuts everyday and I would be devastated to see one of them injured. Good job, Christine, you are all heart! Vicki Tankersley

As animal lovers I know you understand how scared I was. I hope he IS doing high 5’s with his friends. I feed the squirrels in my yard, too, so I’ve asked if they can tap into the local squirrel network and see if the little one is ok.