Home → News → The Latest → What the vultures taught me 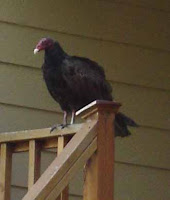 It was certainly unexpected, seeing the vultures sitting on my neighbor’s front deck.

The home is vacant, so the vultures were a welcome sign of life. When I remembered why vultures show up I knew it wouldn’t be life, but rather death, that was occurring next door. And, indeed, there was a dead deer under the deck.

I’ve never seen a vulture before, but I’ve been watching the deer for all the years I’ve lived in this little patch of woods, just a mile from the mall! It saddened me to see that one had died. The vultures just perched there looking at the deer, and were still looking at it the next morning. They hadn’t touched it. They weren’t eager or excited. There was almost a sense of reverence about the scene I was observing. Then one of the vultures spread its enormous wings and flew right over my head – it was breathtaking!

Ultimately the deer was removed, and the vultures flew off in search of other places that might offer them some sustenance. They left behind one feather, which I was honored to find. 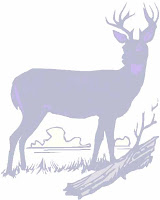 Prior to this experience I would have thought of a vulture as a dark force, swooping in after an untimely death to pick away at the bones. But as I held that feather I remembered that animals often present themselves to us when we need their wisdom and guidance, and I realized that the vultures…and perhaps even the deer…had come to me for a reason.

I knew there was an area of my life that was, indeed, dead, but I had refused to accept it. It was festering away inside of me, taking a terrible toll on my health and causing me enormous pain and suffering.

Suddenly I knew it was time to acknowledge this death in my life. I needed to open the door to my heart and invite the vultures in. I wanted them to find whatever nourishment they could, for I finally understood that none remained there for me.

I’ve read that these magnificent birds keep the planet clean and in balance. Balance is certainly something that has eluded me lately.

Yes, the vultures had much to tell me…and I listened.