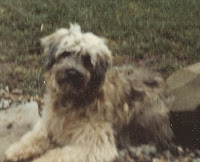 Those of you who’ve read my books have probably heard me talk about Martha, the magical doggie who was born in my bathroom 27 years ago.

But it really started with her mom, Jessie, who I found running around on the train tracks in late May of 1982. She was skinny, covered in fleas, had lost much of her hair…and she was pregnant.

Jessie came home and joined my family of two other dogs. On June 28th she gave birth to 6 puppies in the bathroom of my old 1908 home. She did her best to care for her babies, but let’s face it – her heart really wasn’t in it. She was born for adventure, and with so many things to discover in the world being a stay-at-home mom wasn’t her thing.

I found homes for all the pups – including Martha. It is a long and scary story, but suffice it to say that Martha and her mom found their true home – with me and the other doggies.

Jessie and Martha have both been gone for many years now, but I will never forget the miracles they worked in my life. It was the unexpected loss of Martha in 1995 that resulted in my writing For Every Dog An Angel, a book that is now shared with animal lovers all over the world who have lost a beloved dog. 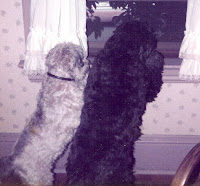 You were the best, Jessie. You gave me so many priceless gifts, the best one being Martha. While you two are flying around up there in the stars would you please do me a favor? Since today is Mother’s Day, could you go find Jake, Penny and Gypsy and then head on over to my Mom – and tell her how much I love her.

To mothers everywhere – whether your babies are two-legged or four-legged – Happy Mother’s Day!

Chris,
That is so beautiful and perfect for Mother’s Day. Maybe Jake will take them to meet Timmy and tell him his Mom misses him especially on this special day.

Well, fuzzy sister, I’m sure our angel critters hang out from time to time on some particularly shiny star. It’s very comforting to me to think they were together on Mother’s Day, sharing stories about their crazy Moms (that would be us!)