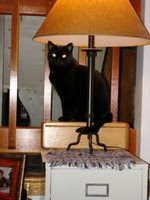 The completed ballot was on my desk this morning. I was a bit perplexed, because I’d mailed my ballot in a week ago…until I saw the paw print signature on the envelope.

So, the cats had somehow gotten their little furry mitts on a second ballot. There was no question that my cat, Star, was the head of this feline operation. I turn my computer off every night because of this very smart little kitty…can you say online shopping?

Voting is supposed to be private, but I felt obligated to inspect the ballot. After all, if there was anything illegal or suspicious going on here, it might be traced back to my home. So I opened the envelope and quickly scanned the ballot. There was only one entry – a write-in candidate for president.

It was for Charlie the Tuna.

I had to smile. Leave it to the critters to circumvent all the bitter political battles of the last year and find a non-partisan solution for the leadership of this country. But maybe this vote was more savvy than I was giving it credit for.

After all, as a fish, Charlie would have a natural connection with “schools,” so he’d probably be a strong advocate for education. And all that swimming has to be good for the cardiovascular system, which means he’d also understand the importance of health care.

I was just about to reward my smart little kitty when I remembered the brand of tuna that Charlie represents.