Home → News → The Latest → Cats at the Olympics

I was walking with a friend the other day, and we were talking about the Olympics…and our cats. Had our beloved felines been invited to participate in the games, what parts would they have chosen to play?

Star – my small, graceful beauty would definitely have been a gymnast. She knows no fear, and leaps like a gazelle.

Dickens – my only boy – can you say weightlifter? Yes, even though he’s lost 4 ½ lbs., he’s still a big boy. He would have loved those weights – especially if he
thought they were Twinkies!

Molly – my mystical, cosmic cat, loves to hide in strang

e places. She would have been a natural in those breathtaking opening ceremonies, where all the performers hid under the boxes and worked in unison to create a ripple effect. 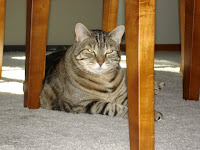 And then there is Pippen. I think it’s pretty clear she would have been the person at the gate, telling you the ticket you bought online was bogus and you needed to leave immediately…before security was called. She would have been good at that.

So, what about your critters?

Oscar would be the short distance sprinter. He is pretty sedentary, but when he gets going, he’s off in a flash.

Henry would be the pretty boy of the relay team. He is always encouraging the others to play with him and chasing them around.

Ben would be … a gymnast. He likes to hang around on the cat tree in odd positions.

Miss Girl… well, she would NOT do well on the balance beam – too wobbly! I think she would be a diver – she often takes a couple stairs at a time and very precariously!

I can just see your four cats in their various events. I love Henry! He sounds like a real team player – a concept my dear Pippen doesn’t quite grasp.

Oh, what a scream. Am glad I found your blog.