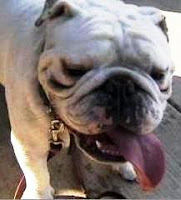 Have you heard the wonderful story about Napoleon the Bulldog? My good friend, Judy Ditfurth, who works with English Bulldog rescue in Florida, brought it to my attention.

Napoleon is a well-behaved two-year old white Bulldog, who lives with his family in Michigan. Apparently he raced out across the road the other day and into a nearby lake, then came out of the water dragging something in his mouth.

It appeared to be a burlap bag, which he brought back to his person. The meowing sounds coming from the bag alerted Napoleon’s mom to the kittens that were inside – six in all. Sadly, two of the kittens didn’t make it, but the other four were cared for until they could be put up for adoption.

Over the years I have learned many things from Judy about Bulldogs, including the fact that their large head and chest, compared to their light back ends, gives them the tendency to go bottoms up in water! That fact makes this story even more special.

It is heartbreaking to think there are people who could throw living creatures into burlap bags, and then pitch them into water to drown. One can only hope the person who did this is aware of how the fate of these throwaway kittens was changed by a loving dog, and a simple act of kindness. One can only hope that person has been humbled by this gesture…a creature reaching beyond perceived limitations to do something wonderful…maybe even miraculous.

Thank goodness for Napoleon…he is a true hero.