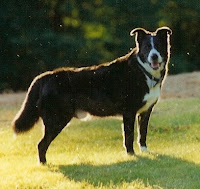 June 14th marked two years since my dog, Jake, left me to go flying through the heavens with the other angel dogs. There was a time when an anniversary like that would have left me in tears for several days. This year, however, was different.

It was because of the three dreams. The first came last year, two days before Christmas. I was outside, calling Jake’s name, and he came running to me through a grassy field. Even though it was daylight, I could tell there was a golden glow around him. He stood proud and tall, with a soccer ball in his mouth! This was a surprise, as I have no connection to soccer, and neither did Jake. He was happy beyond words, a twinkle in his eye, his heart telling my heart that all was well. Then he ran off, and it was crystal clear I could not follow him.

A few weeks ago he came to me in another dream, happy and content as he had been in the earlier dream.

Last week he visited one more time while I was sleeping. In this dream he had come back to life, and as we walked along people who knew us nodded and smiled, as if it was perfectly normal that Jake was alive again. I remember thinking I should write a book about it, but no one would believe me!

It feels so clear – Jake is truly doing well, and when he can he checks in to let me know that although I may miss him, there is nothing to grieve.

So, last Saturday, on June 14th, every time I thought of Jake I saw him wrapped in a golden glow, standing in the tall grass….and I smiled.