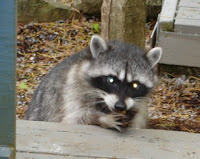 I have been adopted by a raccoon. I tried not to name him, but somehow I found myself calling him Jack. Jack the Raccoon. Jaccoon.

I live in a wooded area, so raccoons have visited me from time to time over the years. Somehow this one seems different. Jack knows I leave food on the deck for an outside kitty I’ve been feeding for 5 years. We named him Sammy…I know, I know….

Jack sits at the door, waiting for me to come out with food. If I step outside he stands up on his hind legs and gives me a hopeful look. I expect him to start chatting with me – “So, Chris, how are you today? Got any yummy treats for me?”

Sometimes he sprawls out on the mat, his head resting on his paws, looking up at the window. I’ve seen this look on each of the dogs who’ve shared my life, but never on a raccoon.

Jack comes throughout the day, and if there is no cat food he scoops up some bird seed and has a quick snack. When he is done, he washes his paws in one of the bird baths. Who knew raccoons were so clean – maybe I should leave him some herbal soap and a fluffy towel.

I have been worried about Sammy. I think of him as my fifth cat – knowing he is safe and well-fed is very important to me. So I was heartened to come downstairs the other morning and find both Sammy AND Jack waiting for me on the deck, eager for breakfast.

If only we all got along this well.