The Sounds of Silence – Life Without a Dog

The Sounds of Silence – Life Without a Dog 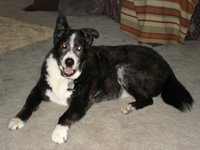 I was watching a movie the other day and found myself caught up in the score – the music that pulls all the pieces of the film into a cohesive package for me. Having a musical background I guess it is understandable that I would engage with the universe through my auditory senses….I HEAR the world.

I always said I would have made the worst private detective – I could step over the evidence and never see it! But I seem to be able to hear sounds even if they are very soft or far away – the bird singing off in the distance, the clock ticking two floors down….and those magical voices that come at any hour of the day or night, giving me tidbits of stories that must be written down.

It is no wonder that one of the first things I told people after I lost my dog, Jake, was how quiet my home had become. I didn’t realize how many sounds a dog makes. The sound of his collar rattling when he would shake his head, the sound of him barreling through the dog door, the excited squeals when I said those magic words “Go for a ride?” – they are all gone now. The absence of the night time sounds is particularly hard on the heart – no more quiet breathing, no more loud snoring, and no more barks and dancing paws as he runs with his friends in the world of dreams.

But…..I am now able to hear the precious sounds my four cats make! Instead of a loud bark I hear soft whispers, meows, purrs and trills. From some far off place in the house I hear the squeaking of a cat toy being wrestled with….or a CAT being wrestled with! There’s the scraping in the litter boxes, the clawing on the scratching posts, and the silent but telepathically LOUD sound of a cat sitting in front of an empty food bowl, willing me from three rooms away to come fill it.

It is becoming clear that for me to have peace with the audible part of my life I must have both cat sounds AND dog sounds….for I am out of balance.