As seen in Cat Fancy Magazine

It seems like so long ago that my home in the trees was built! The property was tucked away in a wooded area, and was visited by a large variety of wildlife and many species of birds. A landscaper was called in to make the yard bird friendly, and to help create a sanctuary that would provide the birds with food, water and safety from predators throughout the different seasons.

It was several years later that my dog, Jake, found the litter of kittens under the deck and decided to bring them in and raise them as his own. 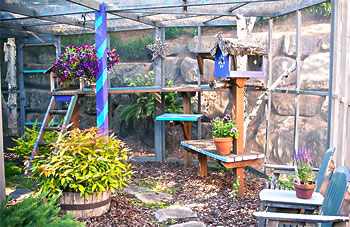 I immediately fell in love with the little felines, but I was certain this had to be some great cosmic joke! Here I was, with a yard full of birds outside, and four cats inside who sat at the windows chattering, determined to get outside even if it meant using power tools to make their escape.

So the enclosure was built, extending off the existing deck and wrapping around the house. A kitty playground was added that included perches, ladders and runways. The enclosure was screened with ¼” hardware cloth, a heavy duty wire that is cat proof but was still easy to work with.

The 100 ft. long rock retaining wall just outside the enclosure is home to many critters, and I have witnessed quite a few staring matches between the cats on the inside and the creatures on the outside, just a few inches away.

I’m not sure who gets more enjoyment from this creation – me or the kitties. But when I go out into the enclosure with a cup of tea the little furballs gather around me, and I am certain I hear them telling me how grateful they are that they can be outside cats, too….and everyone is safe.