The Story of the Sword

Home → About Lighthearted Press → The Story of the Sword 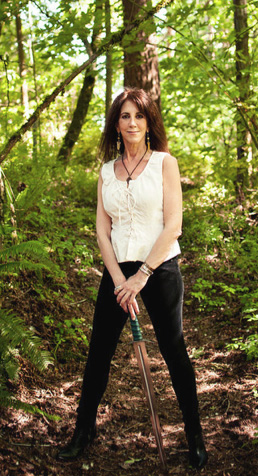 She lives in a misty world, somewhere out there in time and space. I can see her resting in a craggy boulder, which sits at the edge of a woodland stream. The trees have gathered around her in a circle, weaving a canopy that keeps her resting place a secret from all but the one who placed her in the stone, and the one to whom she calls.

She calls to me.

I often wondered why a New Yorker would be called to carry a sword. It’s not as if I saw people carrying them on the subway, or waving them menacingly in Central Park. In fact, that was generally frowned upon.

Then, in the summer of 2012, I found myself beginning an unexpected journey that would bring me face-to-face with my past. I was flooded with memories of myself as a little girl, desperately trying to survive sexual abuse at the hands of my father. I had pleaded with my mother for help but she abandoned me, telling me never to speak of these events. In 1993, I wrote the following words in a piece called Fragments:

One night, she prayed to the stars in the night sky for guidance. The next day her prayers were answered. In her place was a grown-up, living inside her little girl shell. The grown-up did what grown-ups do. She assessed the situation. She put on her armor and took up her sword. I must be ready to protect myself from all of them for as long as I have to. Even forever. 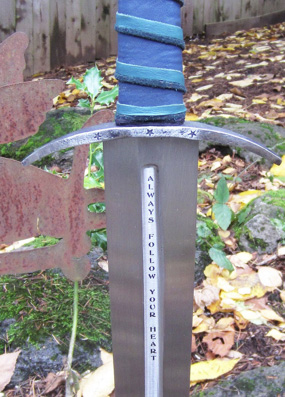 In 2002, I saw the character of Eowyn wield a sword in The Lord of the Rings: The Two Towers. It was as if she reached out from the screen and touched her blade to my heart. I saw that movie twelve times in the theater. I kept going back, week after week, trying to understand what that scene was telling me. I even popped into a cutlery store in the mall, and held the sword, Glamdring, in my hands. Glamdring belonged to the wizard, Gandalf. For a moment, I wondered if I was meant to bring Glamdring home with me, but I knew it wasn’t the right time. And it wasn’t the right sword.

Ten years went by and then something extraordinary happened. It was a scene in the BBC television show, Merlin, that would bring all the pieces of the puzzle together. I saw Prince Arthur unleash his anger at the father who had betrayed him. He disarmed his father and held his sword at the king’s neck, but in my mind he was fighting my father on my behalf. In that moment he became the one thing I’d desperately needed  since I was a little girl—a champion. A lifetime of living in the fog of low self-esteem came to an immediate end. The unexpressed rage I’d carried since childhood poured out of me and decades of excruciating spinal pain instantly disappeared. It still amazes me that a person can hold that much heartache and grief inside, yet be unaware of its presence.

The release of my anger and pain left a void that was immediately filled with great happiness, a sense of wonder and the peace of feeling connected to all that is good and right in the universe.

Most delightful of all, my little child returned!

In the fall of 2012, a few months after seeing Merlin, I designed a magical sword and took my drawing to a local blacksmith. He brought her to life exactly as I had seen her in my dreams. When she was complete, I had the words ALWAYS FOLLOW YOUR HEART etched on the blade.

I named my sword Clarity, in celebration of what was given to me the night I saw the episode of Merlin that changed my life.

Clarity rests on my desk. She is cheeky and stubborn, just two of the things I love about her. She has reached out to people who need help cutting away that which is no longer needed. She has inspired those who are facing a difficult time in their life. She’s pretty good at slicing through red tape, too! Should you ever need her energy, feel free to call to her—she is always here for you.

For years, I’ve been writing about miracles in my books for animal lovers. Now I know for certain that a person’s life can change—for the better—in an instant. Wondrous things happen every day.

If you don’t believe me, just ask Clarity!