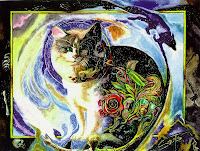 The other day I was in a store, chatting with a man about his wife’s beloved cat. She had found the cat when it was a kitten, and the two had been constant companions for about 15 years.

The cat followed her “mom” everywhere including, on one fateful day, out to her car. Mom didn’t realize the cat was there until it was too late and she had run over and killed her feline friend.

The man said his wife’s grief was very great, and she had no way of handling her loss. A kind neighbor took the cat’s body and buried it in his yard. The woman did not go to the cat’s gravesite, nor did she speak of its passing.

Three years went by before the woman felt she was able to deal with her loss. The neighbor dug up the box and the woman brought her kitty home. Her husband told me she meticulously cleaned off all the bones, and then painted each of them in a color coordinated pattern so she would know how they all went together.

The painted bones went back into the box, and the box went onto a shelf in the closet.

We all grieve in our own way. It took several years, but this woman was finally able to find peace with her loss. In my heart I think all those painted bones magically found their way to her cat, and somewhere up in the heavens one very colorful angel kitty flies contentedly through the starry skies.

Here’s to painting the bones!