What do Mother Teresa, Mariah Carey and The Empire State Building have in common? 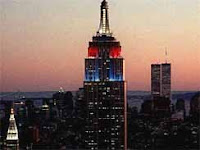 The answer is the Empire State Building went “pink” for the release of a Mariah Carey album, but refuses to go blue and white for Mother Teresa’s 100th birthday this August.

Like so many people around the world I was deeply touched by Mother Teresa, who dedicated her life to helping the poor and the sick. When I read about the doubts that had plagued this small Albanian nun I suddenly felt very close to her. 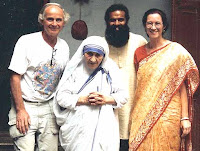 Back in 1996 a friend of mine (Ron, on the left) was travelling through Calcutta. He decided to “stop by” and see if it was possible to meet Mother Teresa. “Absolutely,” he was told, “but she can only give you 15 minutes.”

Ron tried to explain what it was like to be with someone who was 100% present….totally in the moment. We don’t experience that very often. For 15 minutes this magnificent being gave him all her attention, and then she was on to other things.
The Empire State Building honors a diverse list of holidays, people and events, including Christmas, St. Patrick’s Day, Frank Sinatra, Pope John Paul, Martin Luther King, Princess Diana and, yes, last year’s celebration of Communist China.

Honoring Mother Teresa, winner of the Nobel Peace Prize, on the celebration of her 100th birthday doesn’t seem like a poor fit with past celebrants.

Either I’m confused…or this is just dumb.