For the first time in my life I wasn’t going to vote. The mud-slinging between the politicians had left me discouraged…and disgusted.

But then I remembered it’s a privilege to vote. So I thought it over, and decided I would vote for the candidates who hadn’t used the all-too-popular negative ads.

I wound up voting for only three candidates…not necessarily the biggest races in Oregon…and that felt right to me. 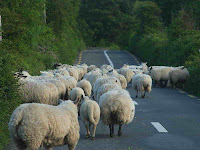 At least on some level I’d be telling politicians that if you use dirty tactics you won’t get my vote. Political candidates, even those who represent my party, are not entitled to my vote. They have to earn it. When they engage in childish “he said/she said” exchanges they are telling me exactly who they are.

Followers are often called sheep. I don’t know enough about sheep to verify if they really are followers, and frankly, comparing politicians to our fleecy friends seems like a terrible insult to the sheep.

What I do know is that our country is facing a lot of challenges. No one seems to have come up with a winning plan to turn things around, but I think that’s because the issues go beyond political parties.

I know it sounds simplistic, but it seems that only by banding together will we have a fighting chance of dealing with all the difficulties facing not only Americans, but people all over the globe.

Look at the united effort that brought those Chilean miners back to the sunlight. Remember the sense of oneness we felt after the horrifying events of 9/11. People weren’t strategizing how to help based on what was in it for them, they just showed up to help because help was needed.

I am looking for politicians who get that.