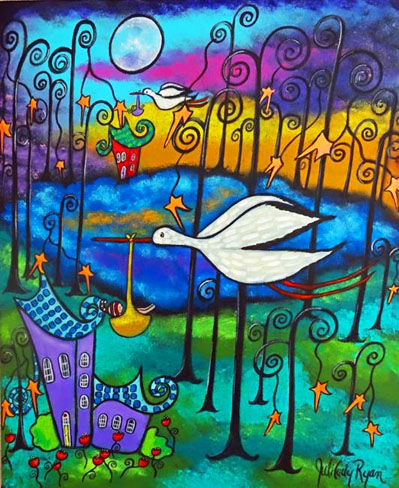 A Gift At Sunset by Juli Cady Ryan

Once upon a time, many years ago, a little girl child drifted peacefully in the stars, waiting for the moment to arrive when she was meant to be born on earth.

A January snow was falling on New York City. The hours went by and it was beginning to look like the birth might not happen until the following day. A graceful white stork soared over the hospital, waiting for the call. Suddenly the words thundered down from above.

The elegant bird flew with great speed and caught the child as she fell through the night skies. The precious bundle was carried to the hospital and flown in through the secret passage that is known only to storks. The baby girl was presented to her mother, who said “I will name her Christine.”

And that is how I was born. Or so I thought until 1995…the year that I met the shaman.

It was an ancient healing ritual called Soul Retrieval that brought me to the shaman’s door. I’d heard this practice can bring home lost parts of a person’s soul that have departed the body in order to survive a past traumatic event. I’ve believed in reincarnation since I was introduced to it over 40 years ago so this ritual called to me. I’d always felt my inner child had fled at a young age, a desperate attempt to survive my abusive childhood. I didn’t tell the shaman anything about my past. He recorded his findings when he was done with the healing so we could discuss what he had discovered. 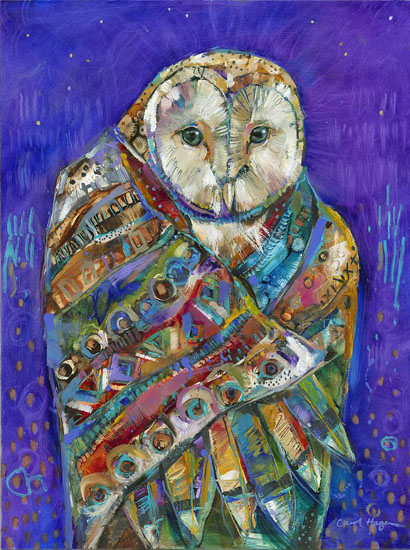 The shaman told me he’d encountered several lost parts of my soul, but he was most intrigued by the piece that was present at my birth. It clearly did not want to be here. He said sometimes this will show up in a child as illness, such as asthma or other breathing issues. I told him I’d never been a sickly child, but that hadn’t been the case for my older sister, Pamela, who died when she was just a few weeks old. I’d learned of Pamela when I found her birth certificate in my mother’s jewelry drawer.

”I was the next baby,” I said.  There was the sound of a large intake of breath.

“You were also the first baby,” whispered the shaman.

He looked straight into my eyes. “That first girl was also you.”

As soon as he spoke those words I felt a shiver down to my core. Could this be true? Had I been born into this family once before?

“Why do you think I was sent back?” I asked.

“Perhaps,” he offered, “a higher power said you must go back. There was work to be done within this family and it was time for it to be completed.”

Perhaps. Or maybe I was ready to come back. 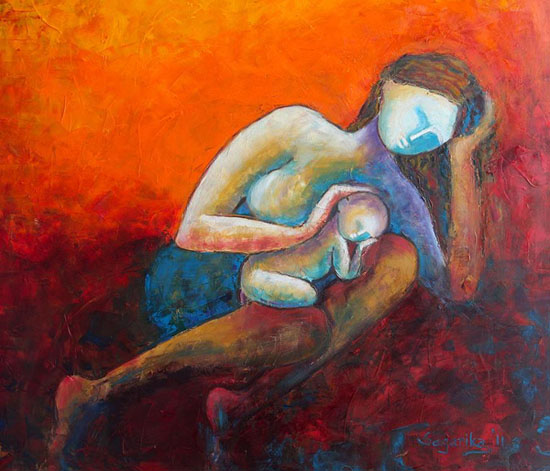 Eighteen years would go by before I shared this story with a woman who had been a delivery and neonatal intensive care nurse.  She told me about an experience involving her daughter that I share with her permission:

She was three years old and I was brushing her hair. Very matter-of-factly, she said, ‘I was going to come earlier, Mommy, but you weren’t ready for me.’ It came out of the blue and was not related to anything we had been doing or were going to be doing. I forget what I said in response, but it was very clear to me that she was referring to her actual existence. I was 24 years old, and had had my abortion at 17.

Many years later, I relayed the story to a friend. She started to cry and said, ‘Oh my god….my daughter said the exact same thing to me.’ She, too, had had an abortion years before she had her first child.

I believe every woman has the right to make the decision that is best for her when it comes to bringing life into the world. But I’m left wondering if we are meant, come hell or high water, to be born into certain families. Are there threads that unfold through time and space which compel us to enter into relationships and create experiences with life of all kinds, driven by a yearning that springs from the soul and brings healing to the heart on levels we can’t begin to understand or explain?

Are there simply some journeys that must be taken?

This question began to tug at me over the summer as I fought ferociously to keep my reproductive organs even though my child-birthing days were long gone.

And that’s when I heard the baby calling to me.